A special juice through metamorphosis

Life is change – POSCA also goes through different phases of maturation and natural transformation, until it is nicely packaged and can give pleasure and refreshment.

The noble ripeness (botrytis) only forms on the grapes at special vintages, which perforates the cell walls with its enzymes so that the watery components evaporate. The concentration of the valuable ingredients increases and at the same time the noble fungus metabolizes sugar, acids and nitrogen and in turn releases valuable metabolic products. These change the color and aromas of the grape juice – the noble botrytis bouquet is created: the first metamorphosis. 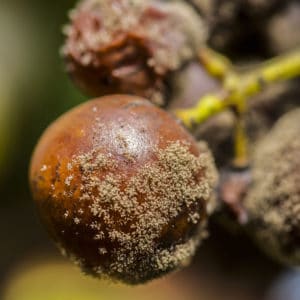 This juice from overripe grapes, with a natural sugar content of up to 45%, is fermented with yeast cultures to make wine (Trockenbeerenauslese). In this process sugar becomes alcohol when it is propagated: the second metamorphosis. 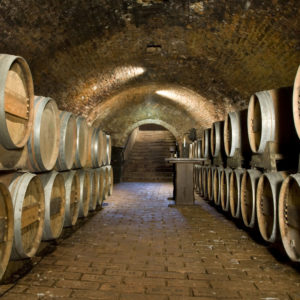 This wine of the highest grade (Trockenbeerenauslese) is in turn the starting point for a third transformation, triggered by the tried and tested mother of vinegar: a gelatinous, stringy mass of vinegar bacteria. They ferment the alcohol into acetic acid with the help of oxygen. Only now is this special vinegar given its deserved rest – for 8 years in wooden barrels to mature. This is where the sherry notes and wood aromas arise: the third metamorphosis. 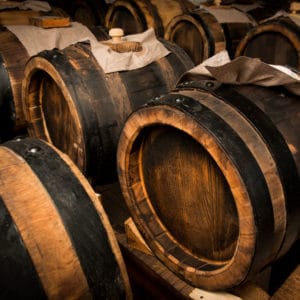 IV. Metamorphosis: The right dose determines the effect, the right mixture determines the taste. The natural sweetness and fruit of a rich red grape juice provides the substructure – coordinated with fresh spring water for the discerning palate with a joyful appetite for a culinary and adventurous journey into antiquity. Matured and bottled, POSCA now faces the last and most refreshing metamorphosis: that through the stomach. 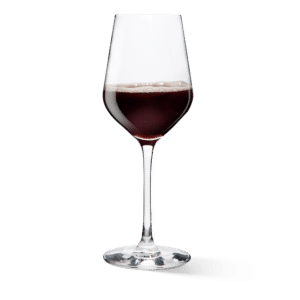 “‘Look well into thyself; there is a source of strength which will always spring up if thou wilt always look.”
– Marcus Aurelius, †Vindobona 180 A.D. 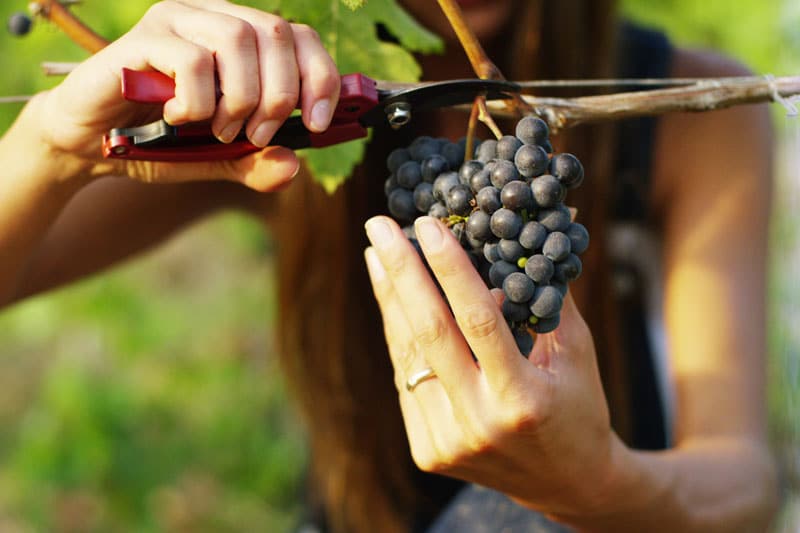 After many test series, we decided on the Austrian Sankt Laurent grape, which is hand-picked and made into a heavy and dense grape juice, without the addition of sulfites. We primarily decided on a red grape for their the secondary plant substances: Resveratrol, for example, is said, among many others, to have a positive effect on the suppleness of the skin. We believe in nature’s abundant pharmacy cabinet. 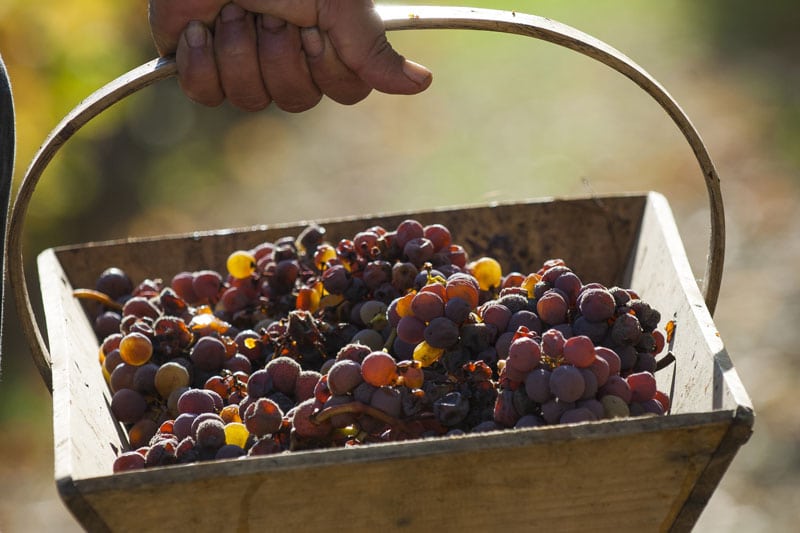 Northern Burgenland, embedded between Lake Neusiedl and the Leithagebirge, is one of the rare climatically favored areas in Europe, along with the Sauterne and the Tokaj region, where noble rot (botrytis) can occur more frequently. We appreciate this oxidative note and believe that it matches the taste of antiquity, where fish scraps were put into barrels to make the finest seasonings of the time. We hope to meet your taste too. 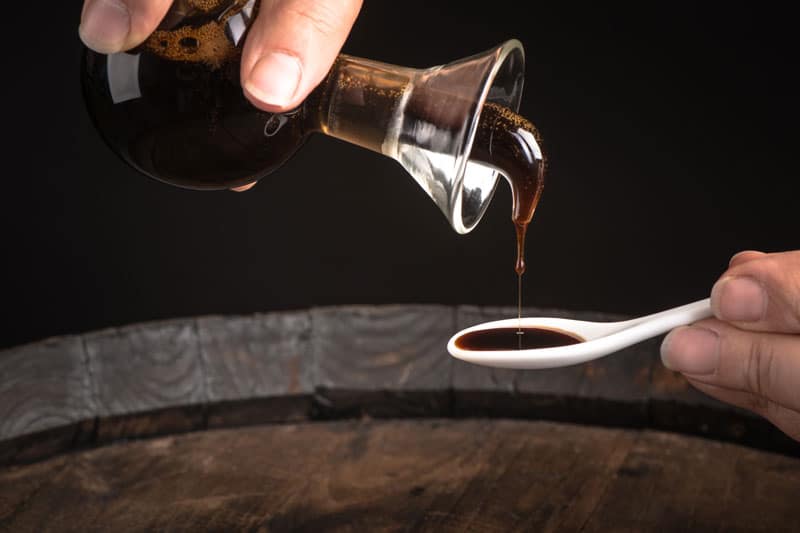 Once the dry berries have been fermented to the highest grade of wine (Trockenbeerenauslese), the noble liquid is poured into wooden barrels, where the Mycoderma aceti (known as mother of vinegar) is added. For eight years it is cherished and cared for according to a century-old ceremony until it becomes a fine and thick balsamic vinegar. We value this old tradition very much and are still impressed by this handicraft which will continue to impress us in times to come.

The juice of red grapes – an elixir of eternal youth?

The juice of red grapes contains more phytochemicals than that of white grapes. There are
numerous studies on the effects of grapes and grape juice.

According to a study by the University of Leeds, grape must (lat. Vinum Mustum)
does not only improve memory and brain activity, especially in humans over 50 years, but is believed
to contain substances that decrease the risk for heart disease and cancer. A study by the
University of Connecticut, as well as further studies from Georgetown University, suggest that it
supports the immune system and even prevents viral diseases.

The diverse effects of the red elixir are based on a cell-protecting activity and
the functioning of the flavonoids. These are plant substances that are already used in therapies of
circulatory disorders and venous diseases because of their blood flow improvement qualities. In addition,
they allow the blood vessels to expand. The agglomeration of platelets is prevented and blood lipid
levels are improved. There are even signs of those plant substances actively lowering the blood pressure.

It has also been shown that after consuming red grape juice, there is less LDL cholesterol
oxidized – a process that can, long-term, lead to arteriosclerosis. A reduction in the formation of
free radicals was observed and there have been fewer inflammatory markers found in the
blood after red grape juice consumption. Resveratrol and polyphenols are powerful antioxidants that fight oxidative
stressand thus reduce the risk of chronic diseases. In rats it was also observed that regular consumption
decreased the spread of breast cancer cells, and the tumor actually shrunk. In humans there are early
signs that DNA damage and the formation of reactive oxygen species can be reduced.

Although there has been little scientific research, there is evidence for a strengthening of the immune system
by phytochemicals in grape juice, as they reduce the ability of a pathogen to infect a host, preventing the
outbreak of a disease in the first place. Grape juice is also said to be preventive against migraines.

In addition to the supply of minerals and vitamins, mental and physical performance is improved.
The contained glucose, as a source of energy for the body’s cells, gets into the blood particularly
quickly. As the blood flow improves, more oxygen is transported to the cells. The only way to get
a more energetic start into everyday life is probably to eat raw grapes. However, from excessive
consumption of fructose, especially in concentrated, industrial form, must be warned:
P.O.S.C.A. is a purely natural product and has been balanced with low calories.